How to be more mindful at work 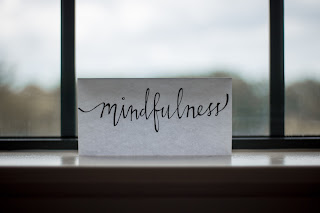 When I was younger I used to think that mindfulness was some hippy rubbish my Mum used to do at yoga retreats. It turns out that there is truth to the saying “the older you get, the wiser your parents become.” As I have learned more about it I have discovered that mindfulness is a useful skill in all parts of your life.
Mindfulness is defined as “a state of active, open attention on the present.”

In fact one of the most mindful people I have ever known was an ex-Special forces member named Chris I used to work with in my aviation days. His awareness was amazing. In the pub he was always looking around to see who might cause trouble (so we could leave before it started), driving through a busy street he was looking for where a child might run out in-between parked cars and in the office at work he was like Radar from MASH – he always knew when the boss was coming before he entered the room!

Science supports the idea of mindfulness too. When you are being mindful at work you are “single tasking.” Your brain can’t multi-task, it can only switch quickly between one task and another. The act of switching between tasks uses mental CPU cycles and makes you less productive. Think about it, the times you are most productive are when you are in “the zone.” When you are in the zone you are 100% focused on one task.

When you are being mindful in a conversation or a meeting you are paying attention to the people in the room. Research suggests that only 7% of communication is verbal. If you are IM’ing or emailing at the same time you are missing 93% of the message! That’s a recipe for mis-understanding and rework! IE – its inefficient!

Take one minute of silence before meetings. Let go of what you were just doing and turn your attention to the upcoming meeting. Ask yourself, “How do I want to show up in this meeting What do I have to offer? What do I want to accomplish?”

Listen during meetings. Notice when your mind is wandering. Notice when you stop listening and start waiting to speak, and what that does to your state of mind. Try to listen without judging.

Prepare for calls. Before making a call, take a few moments to tune into yourself. Notice what expectations you are carrying, see if you can let them go and begin the call with an open and curious mind. Be aware of your current emotional state (eg if you are hangry, make sure not to snap at people unnecessarily). Think about how you want the meeting to go. To quote Stephen Covey – begin with the end in mind.

Write mindful emails. Notice when you are reacting rather than responding and consider how your words will impact others. There is no tone in text and emails are one of the best ways to get in to an argument. A thoughtful email can end a time-consuming thread, build or mend a relationship or open up an important conversation.