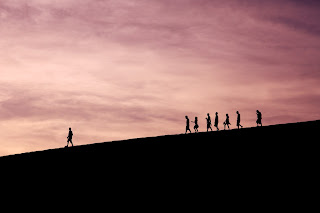 As leaders we ultimately succeed through others. So, what do you do when others aren’t succeeding?
As we know, at least 40% of people’s daily activities are habits. Over time we all find routines that result in some kind of reward – and we keep repeating them. Now, here’s the thing, habits can remain even when the context changes. The original context for the habit might not have been good.
If you want to help someone change a behavior you need to help them change a habit. Given that it costs an average of 20% of someone’s salary to replace them, it’s really in your best interests to help them.

When to step in and help.

As a leader, how do you know when it’s time to step in and try and help someone? My rule is the third time you see an issue you have to address it. The first time you notice it, the second time confirms it, and the third time its a pattern. Why not the second time? Because the person might realize it’s an issue the second time around and fix it themselves. If they do it a third time however they will most likely continue doing it until you intervene. The exception to this rule is gross misconduct – if someone is stealing or a danger to other people then you must intervene the first time.

Once you notice a pattern of poor performance, what do you do? First off, you need to address the issue within one day of confirming it is an issue. The longer you wait the less impactful the feedback will be. You should have the conversation with the person in person, via video or on the phone. There is no tone in email and you will definitely want to see their non-verbal clues like tone of voice and facial expression. You should send them a summary of the conversation in writing afterward.
Start the conversation by acknowledging that you aren’t perfect either. Then go on to say what you noticed. Use standards or rules as the “bad cop” and be on their side trying to help them improve. For example “our customers expect the phone to be answered in 5 rings” or “QA needs a 5% or less error rate.”

Give them a chance to share their side of the story. Be open minded and listen to what they have to say. You need to try and get to a point where they acknowledge that it is an issue. People will put more energy in to making a change when they truly believe the change is necessary. If you haven’t got to that point after 15 minutes of conversation however then it is time to agree to disagree and tell them they have to make the change.

Before you can change the habit, you need to get to the root cause. What is the reason for the behavior. Remember – behind every behavior is a reason. Why are they making mistakes? Why are they missing deadlines? Is it because they are lacking skills? Are they unclear on when (and why) the work must be completed? Why do they keep having butting heads with other people? Do they have conflicting communication styles?

Poor job performance is usually easier to get to the root cause of. Find out what their expectation is. Then, recalibrate. Do they think another task has a higher priority? Do they know what the actual deadline is. Do they know who is depending on them to do their part of the task? Get the person into the habit of asking for clear goals before starting a project instead of assuming. Do they not know how to do something? Are they late for work because they don’t know what the traffic is going to be like? Get them in to the habit of leaving the house 10 minutes earlier. Whatever the cause is, find a repeatable habit they can do every time to change it.

Make sure they know the “reward” for the change too. Habits consist of three parts – the reminder, the routine and a reward. The reminder is “when this happens, I…” For example, when I am given a work order, I call the customer and confirm the deadline. The routine is the habit itself. In this example it would be calling the customer to confirm the deadline. The reward will depend on the person. Perhaps the reward will be a feeling of greater autonomy because they know you aren’t going to check up on them. Perhaps its mastery and feeling like they are doing a great job. Perhaps its purpose, maybe the person likes knowing they have helped a customer out.

Poor people skills are slightly harder harder to get to the root cause of – but still very much possible. There are many behavior profile tests out their you can take to help. The DISC profile is a great place to start. The thing to remember about people skills, is that an attribute isn’t necessary “bad”, it is using it in the wrong time that is bad. For example, if the person is a direct communicator and they keep upsetting another colleague who is an indirect communicator, then they need to get into the habit of being more indirect when dealing with that person. For example “when dealing with Taylor I will ask how they are before asking them to do something.” However, they would be well served to continue to be direct with fellow direct communicators.

Once you have had the conversation, be sure to tell them whenever you see them being successful. This will encourage them to continue working on the new habit. Habits by the way take an average of 66 days to form. The goods news is that in a work environment you get regular reminders to form the new habit so this time frame can be much shorter.


To summarize the process: